My Family from WiddlyTinks.com

What do you remember MOST about being a kid?

Ah...kidhood. Running and playing, being home for when the street lights came on, soccer, and playing with the boys. These are all things I remember best about being a kid. All of the aforementioned activities took place outside.

I was barely ever in my room as a child, through the daytime hours, anyway. I would much rather be outside, climbing a tree, building a fort, or playing soccer. From the time I was old enough to be outside unsupervised (around 10 or so?) I had the run of the neighbourhood. I had my core set of friends and activities depended on who was out and about that day.

The kid I hung out with the most was named Chris. He was younger than me, 2 or 3 years, but he was mature for his age *wink* and we got along great, Chris and I. I seemed to get along better with the boys; for the most part, that trend has continued to this day. Chris and I, along with a couple other neighbour boys, would go and explore construction sites, under the railway bridge down by the river, fields near our houses, or set up fort in some remote area. We never tired of playing outside, even in the rain or cold.

Chris was my first boyfriend (I was ten, he was seven). I was a much older woman so I suppose he got a thrill from that. Our dates included playing catch, hide and seek in his parents' basement, and tree climbing. That tree in his backyard gave me a scar on my lower left calf that is still visible today, if you know where to look.

I shake my head now, when I think of all of the childhood memories kids these days are missing out on. I don't imagine that it's very exciting to have video gaming to be your only memory. No tree climbing, no fort-building, no running alongside rushing freight trains, screaming at the top of your lungs...

I miss being a kid. Wanna go outside?
Posted by Rebecca MacLary at 01:07

Donate to Help Clean Up the Oil Spill

Items Found in My Etsy Shop

Find me on Etsy

Rebecca MacLary
I've been writing and editing for over ten years. In the last five years, I have focused on online content work, thesis papers, and ebooks. I write and edit mostly non-fiction and poetry. If you are a potential client, learn more about me on the "About Rebecca," "Testimonials," or "Resume" tabs. You may contact me by email at rebeccamaclary@gmail.com

And So It Was Said

"It is easier to build strong children than to repair broken men."
~Frederick Douglass 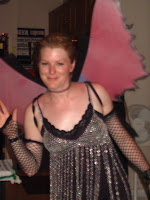